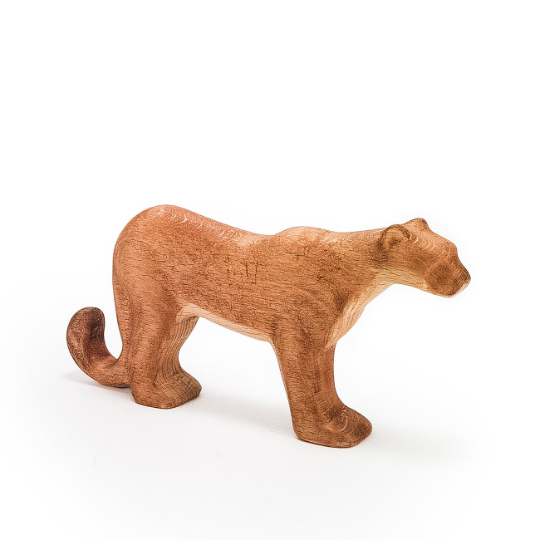 Why would a kid want to play with a wooden toy cougar? What could they do with it? Stack it? Learn what a cougar looks like? Well, we believe that there are toys which are much better for stacking, and animal recognition can easily be taught just through a picture. Toy animals have many more and better uses as we wrote in this looong article.

If we want children to make the most of their toys and come up with rich, long, independent play away from screens, we could spare some time and help them – by sharing with them knowledge of the world and some good stories. Why? Because children play out what they know. If they know little, with little they come up while at play. Imagination needs food and fuel, and it feeds on knowledge of the world and its imitation and enactment  in the first place.

How do we teach children about animals? What is appropriate to teach? How do we find the resources?

It is true that good children’s books about specific animals are not always easy to find, and it is true that most parents do not have much time to do their own research. However, they could always find an article in Wikipedia and pick up the topics that might be of interest to kids, jot them down and then just retell the most important parts.

Children are not so interested in numbers and details. They need to know the big picture, and they are interested mostly in habitat, food, behavior, threats, and enemies. No need to fill their heads with kilograms and inches. Size can always be imparted through comparison to other animals, and they already have other toys or can be shown a picture.

There are other things that might not be of immediate interest to children as they will probably not have the general knowledge to think of them, but once they are introduced, they will be eager to know more. They might get interested in taxonomy and how animals are related to one another, how they are parts of ecosystems, how they are affected by climate, how they affect the lives of people, and how they find their place in people’s folklore, etc. Thus learning about an animal can branch out to topics such as geography, culture, literature, etc.

Here is some information you can readily use about cougars

to share with your children, who, in turn, will eagerly incorporate any piece of knowledge into their play, coming up with richer and more interesting scenarios – this is their way to make sense of the world around them and actually learn.

What is the cougar’s real name?

The cougar holds the Guiness record for the animal with the greatest number of names – more than 40 in English language alone (e.g. puma, mountain lion, red tiger, panther and catamount). There is a good reason for that: it occupies a really huge range – both Americas, from end to end, so it has been given different names in different places.

Why is the cougar spread so far and wide?

The cougar can be found from the Canadian Yukon to the Strait of Magellan – all across the Americas – in mountains, forests, deserts and wetlands. They are not choosey, so they can easily adapt to a variety of conditions. What they always need are huge areas of wilderness as they are territorial, so every animal needs a big area for itself as they do not live in groups. People claim more and more of cougar habitats, so ever smaller areas are left for the cougars to use, which means less prey.

They would prefer their territories to provide them with dense bush and rocky areas (precipitous canyons, escarpments) for stalking, but they can live in open areas with little vegetation too.

Although cougars live on their own, if they are to survive as a species, they need to travel to find partners to mate. It is becoming harder for cougars to reach the territories of potential partners as people have taken some territories and fragmented habitats. They have also built roads, and some cougars are killed by vehicles, especially on highways. Here is why it is important for people to leave corridors so that cougars and other wildlife can travel far and wide in safety.

Relocation of cougars makes them vulnerable to attacks from other cougars who have already established their territory. Some young cougars might be killed by older ones when they separate from their mothers and move to other territories.

Why do people say that the cougar is a cat?

The cougar is a cat because it belongs to the cat family. It shares a long list of characteristics with lions, tigers and domestic cats. You can pick some of these that might be interesting to your kid from the list of characteristics in this article. If children get interested in the general topic, you might explore other biological families as well. Besides an interesting entry point into the field of zoology, this could also serve as one of the “pegs” of general knowledge to which a child will relate academic knowledge and serve as a foundation for educational excellence. Learning how to see relationships and patterns makes the world a meaningful place worth knowing.

What do cougars eat and who eats them?

Cougars are carnivores, and true carnivores cannot live without meat, so they have to hunt other animals. Even though they can be very fast runners, they are the best at short distances and prefer to lie in ambush or silently stalk their prey  in order to pounce from behind and deliver a lethal bite to its spinal cord.

They would prefer to eat hoofed animals, and their favourites are certain types of deer, but they would eat any animal they can get, including rodents and insects.  They would even eat penguins and baby crocodilians. Again, their lack of choosiness helps them survive as a species.

They drag their prey to a spot where they would prefer to eat it, cover it with brush and return to it to feed on it for days. Often they are forced to yield their prey to other animals – jaguars, bears, alligators and packs of wolves. While a cougar is stronger than a wolf, it usually loses against wolves as they come in packs. Sometimes cougars even lose territory to wolves as they do not feel comfortable nearby – wolves not only take their kills but also prey on their cubs. Adult crocodilians are also capable of attacking cougars, but this happens rarely as cougars, though capable of swimming, tend to avoid bodies of water.

How do they affect their habitats?

Cougars are a keystone species. Just as a keystone holds an arch together, cougars keep an ecosystem together. Many other species, both plant and animal, depend on them for their existence.

We feel sad when beautiful deer are killed by cruel predators, but if it were not for the predators, the numbers of herbivores would increase beyond what habitats can sustain – they would overgraze vegetation and make it impossible to regrow. Thus many other animals would lose their food and homes. Loss of vegetation often leads to soil erosion.

The animals killed by cougars provide not only food but also habitat to many insects, who also find mates and breed there, whose larvae develop there, etc. In turn, they provide food for birds and other species.

When cougars eat birds who feed on seeds, they disperse seeds throughout their vast territories and thus help plant species spread and survive.

This is not just theory and speculations, and you can easily find information about devastated ecosystems due to loss of cougars.

What are the threats to cougars?

As we already mentioned, cougars lose their habitats to humans. This also brings them closer to human settlements and infrastructure, where they lose their lives in the heavy traffic of highways.

The closer a big carnivore moves to humans, the more threatened humans feel as they fear attacks on themselves and their farm animals. As a result, they start killing the wild animals. Sometimes this does not help. In the case of cougars, when some older individuals who have learned to avoid people are killed, their territories are taken by younger ones who react differently.

When young cougars leave their moms’ territories, they might get killed by other cougars whose territories they enter.

Other causes for death in the wild can be starvation, disability and disease.

Are cougars a threat to people?

In the first place, they may kill livestock and pets. In the past ranchers estimated their destructiveness on a par with the destructiveness of wolves. This usually happens when cougars become habituated to people (whom they usually avoid) or in situations of severe starvation. Attacks are most probable in late spring and summer, when young cougars leave their mothers’ territories to search for and establish their own.

They rarely attack people because prey recognition is a learned behavior, and they do not recognize people as prey. Cougars who are not habituated to people did not show threatening behavior to researchers who approached them closely.

Cougars who attack people usually behave in unusual ways – they are not afraid of humans, they are active during the day, they stalk people. There have also been cases of pet cougars mauling people.

What can you do to avoid a cougar attack?

Like many other predators, a cougar may attack if it is cornered, if their chasing instinct is stimulated by a fleeing human or if a person “plays dead”. If you stand still, a cougar might consider you easy prey.

You can threaten the animal through intense eye contact or loud shouting. You better try to look larger and more menacing to make the animal retreat. You can fight with sticks, rocks or even bare hands – all these would often persuade an attacker to disengage.

Just as they populate the two American continents, cougars populate Native American folklore, and they are perceived in different ways by different tribes. They are adopted as clan animals and totems; they are folktale and legend characters. Here is a link to several of the legends which feature Cougar. The internet seems to offer many other resources on the topic.