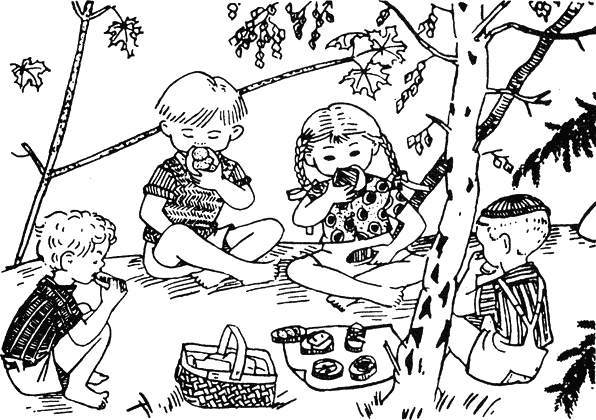 The children of Noisy Village wear plain clothes and play with simple toys. They do not have any screens to keep them entertained, and they do not have access to enrichment activities. In fact, nobody cares to keep them entertained as in this old-fashioned world it is children who are responsible for their own entertainment, so they have to create it on their own. They even have to earn their pocket money. Their village is so small – just three houses, so they have to walk to another village to attend school – even in a snowstorm.

However, these six children seem to be the happiest in the world. They are free to roam the big outdoors, and they are free to see their friends anytime they want. Their parents trust them to bake real cakes, to catch crabs, to take care of their younger siblings and neighbours, of grandparents, of crops and animals.

There are no extraordinary situations, but ordinary life is full of occasions which children need to figure out on their own, in which they need to test their resourcefulness, bravery and resilience.

The stories are set in rural Sweden, and they are told by a 7-8 (or in some editions 9) year-old girl, and each comes in a separate chapter, so they can make enjoyable bedtime stories. They have also  been filmed. The books were first published in the 40s-50s of the 20th century.

In English these books can be found under titles such as “The Children of Noisy Village” or “All About the Bullerby Children”. In some countries they come out as several books, and in others they come out as an anthology. They were written by our favourite Astrid Lindgren.