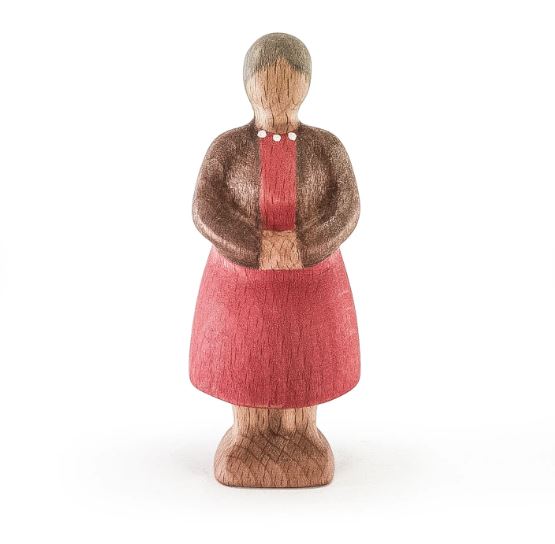 We come from a culture in which the elderly are focused on being useful and active, helping their younger relatives and living with or near them. Of course, this traditional approach has been thinning out for decades and is not the norm for a growing number of families, but it is still quite alive.

As a result, many children spend a lot of time with their grandparents, and many families rely on the older generation to take care of their children on a daily basis, while the parents are at work; some families who emigrate in search of better economic opportunities might initially leave their children in the homeland to be taken care of by grandparents – for a couple of years. We are also seeing more and more grandparents spending long stretches of time away from their homes – in the big cities or even abroad to take care of their grandchildren – as it is now harder to find affordable child-minding services in bigger cities or in the richer countries.

Even when kindergartens are an affordable and convenient solution, if our parents are in relatively good health, we often prefer to entrust our children to their care rather than to the care of institutions as we believe they will receive true love and better care.

Our older generations are an asset not only because they take care of our children but also because they come from times when people in our country were better educated, more resourceful, less egotistical, more responsible, more self-reliant, not dependent / addicted to screens. They carry more in their own heads, and their hands are trained and experienced to do many more things than our hands can. They also lived (longer) in darker totalitarian times, and they have learned how to be more patient, frugal and philosophical, and they are faster to recognize evil in sweet disguise. We can rely on them not only to repair furniture or an electricity socket, to make pickles or knit socks but also to share stories that help us make sense of the world and give us unexpectedly sane advice.

We are blessed to receive so much from the older generations. However, there is a darker side to this. We tend to take our elderly for granted, assuming that they should always be there for us and our children, prepared to sacrifice their leisure activities, social life and even rest for us. Being more modern, that is more spoiled and egotistical, we are not striving to be like our elder relatives and neighbours; we prefer to grab opportunities to enjoy ourselves, and sadly, this is what we unconsciously teach our children.

Here is why we would like to remind ourselves and our friends that we should be grateful to and respectful of older people, that we should appreciate them and learn from them, and this is the attitude we should foster in our children.

Teaching by personal example is priceless, but more and more families are less and less in real touch with their elder relatives and older people in general. Here is why literature, art, films and toys might be worthy alternatives and additions.

SOME CLASSIC TALES ABOUT ELDERLY PEOPLE

In Bulgarian folklore we have a short tale about a man who decided that it was more practical to move his already old and infirm father to a pigsty and feed him there once a day – only to see his own son, following in his steps and carving a trough to feed him in the pigsty some day, so the man regretted what he had done and immediately took the elderly man back home.

We also have a similar folk tale about a king’s decision to kill all elderly as they were useless and resources were wasted on them. A dignitary hid his father and spared his life, and later, when the kingdom went through crises, the old man was the one who gave sage advice and saved the day. At some point the king figured out that the solutions came from an old man, so he realized he had made a mistake and issued a new order not to kill elderly people anymore but to venerate them.

Good and bad treatment of elderly people is one of the main topics in the beautiful fairy tales by the Croatian writer Ivana Brlić-Mažuranić, a multiple-time Nobel prize nominee, who employs Slav folklore and Christian motifs in her tales. The fascinating book Croatian Tales of Long Ago has been translated in several other languages. You can focus on How Quest Sought the Truth as well as Stribor’s Forest.

Andersen is another author who wrote fairy tales featuring elderly characters and fostering appreciation and empathy for them. We would like to recommend Grandmother, The Old House, and The Old Bachelor’s Nightcap. They present characters’ last days of life and their death. You can follow the links and read them in advance to decide if your children are mature enough to benefit from reading / listening to them.