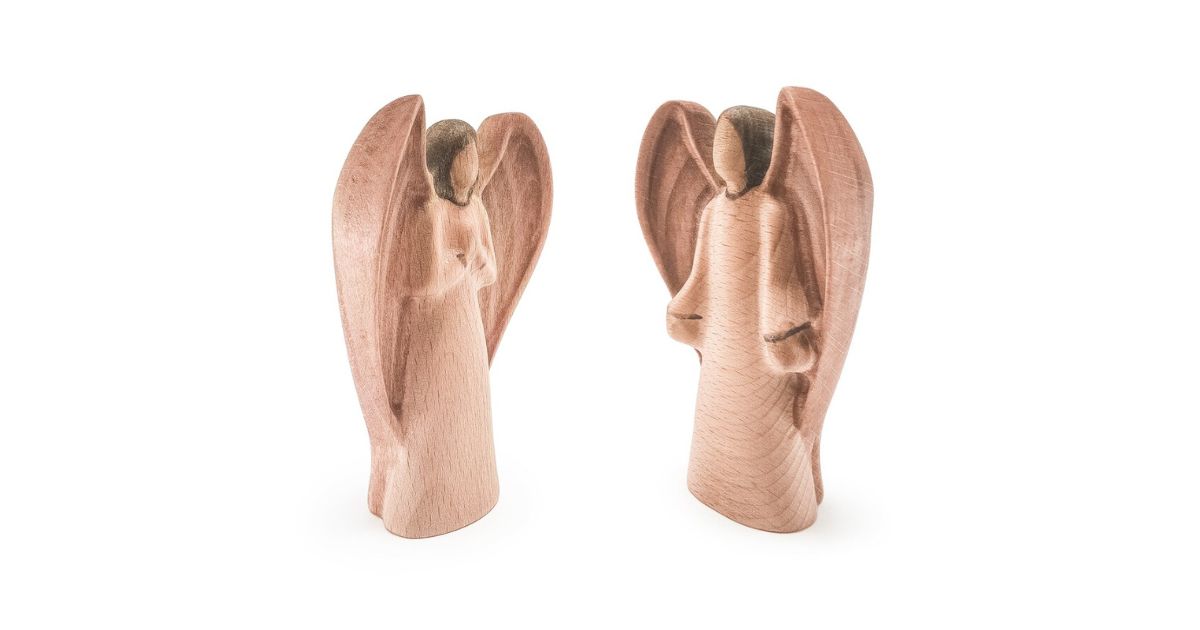 Angels are creatures featured in the teachings of several religions – Judaism, Christianity, Zoroastrianism, Islam. However, we have not explored all of them, so we will focus on the Christian perspective on angels.

According to Christianity, God created the invisible world long before he created the visible one in which we live. He populated it with creatures that we describe by the umbrella term “Angels”. However, they are not all of the same kind, so we will discuss this later.

How do we learn about angels?

How do we get to know about these creatures? The most readily available source of information about them is the Bible. Here are two of their most widely known appearances:

Archangel Gabriel announced to the Theotokos (Virgin Mary, Christ’s mother) that she would give birth to the Messiah (about whom prophets in the Old Testament made prophecies), people’s Savior. If she agreed, of course, because like all human beings and angels, she was endowed with free will, and she was not God’s puppet or a programmable robot.

An angel removed the stone from the entrance of Christ’s burial tomb, sat on it and talked to the women who had come with funeral spices and ointments to prepare Christ’s body for committing it to the grave. He told them that Christ had risen and instructed them to take this joyful news to the apostles.

Who are the rebellious angels?

Like people, angels are endowed by God with intelligence, speech and free will. Here is why some of them decided not to live according to God’s plans for the world, so they rebelled. The rebellion was started by one of the most powerful, beautiful, radiant angels. He was called Lucifer (light bearer). Now Christians call him Satan / the devil / the enemy.

He forgot that he owed his existence and all his impressive qualities to God – his creator. He was so focused on himself, so fascinated with himself, so proud of himself, that at some point he thought he was divine himself.

He rebelled against God, taking with himself a large number of angels who accepted his authority. The angels who remained faithful to God, led by Archangel Michael, fought against Lucifer’s army. This battle took place long before our visible world was created.

At some point Light conquered Darkness, so the rebels were hurled from Heaven into the abyss. Their fall further and further downwards continues to this day. Their pride, stubbornness and hardness of heart keep growing. They laugh at the idea of repentance and salvation, so their fate is to perish.

When the visible world was created, and the first people, Adam and Eve, enjoyed their life in the Garden, Satan sneaked in in the form of a snake (Satan and his demons can take any shape they wish, even pose as angels!) and talked Eve into tasting the only forbidden fruit. In turn Eve talked Adam into tasting it too, so they brought on themselves and the whole visible world death, sickness, suffering. The whole visible world (not only people but plants, animals and inanimate nature) changed because of this act, and the change was one of corruption. It was not anymore the perfect harmonious world God had created.

Why did Satan tempt our ancestors to rebel and thus lose the perfect life God had prepared for them? Because he envied them and because misery loves company.

To this day Satan and his army tempt humanity in order to separate it from God and keep it away from Him and thus take it with himself into the abyss and death, preventing it from inheriting the blissful eternal life that God prepared for people in Heaven.

The armies of Light, however, are trying their best to help us out, but which side we choose is on us – because we were made in God’s image – we have intelligence and free will. We are also respected by God and his armies of Light, so they will never lay traps for us, force us or try to cheat us into submission – unlike Satan and his demons.

The Fathers of the Church delved into the realm of angels and they shared in their writings what had been revealed to them. They were humble, and they said that they did not know everything – only what God willed to reveal to them.

From their writings we learn that the number of angels is much greater than the number of humans. We also learn that they are divided into hierarchical ranks and categories. They all do what God created them for, but they do it out of love, gratitude and respect for God, following their free will and wisdom, which tells them this is the only true, beautiful and good way to live.

They are God’s co-workers, responsible for different parts of the universe – some for natural elements, others for nations, third for individual people, etc.

Only one order of angels comes into contact with human beings. These are God’s messengers, and some are people’s personal guardians.

Every person has a guardian angel, but some people inadvertently drive away theirs through a terribly sinful way of life.

Compared to us, angels are almost immaterial, but compared to God, even the most ethereal thing is coarse. When they have to meet people, they take on appearances that people can perceive and stomach. Traditional Christian art – icons and frescoes – depicts them in a certain way – they look like human beings with wings, and they all look like young men.

If you are interested in angels and would like to know more about their ranks, qualities and missions, you could research the writings of the Church Fathers.